The purpose of this article is to discuss and share some insight on real life issues caused by BGP 3rd party next hop.

What is Third Party Next Hop in BGP?

lets get definitions out of the way by saying Third Party Next Hop describes the unusual case where dynamically received eBGP routes happen to have a next hop address that differs from the neighbour your peering with and from whom you learnt the said routes. The normal behaviour in eBGP peering is that the next hop address is always updated with its own as opposed to the originator however there is an exception to this rule.

3rd party Next Hop happens when the routes are learnt from and passed onto neighbours on the same LAN segment and the next hop address isn’t updated so return traffic does end up asymmetrically routing between receivers and senders. 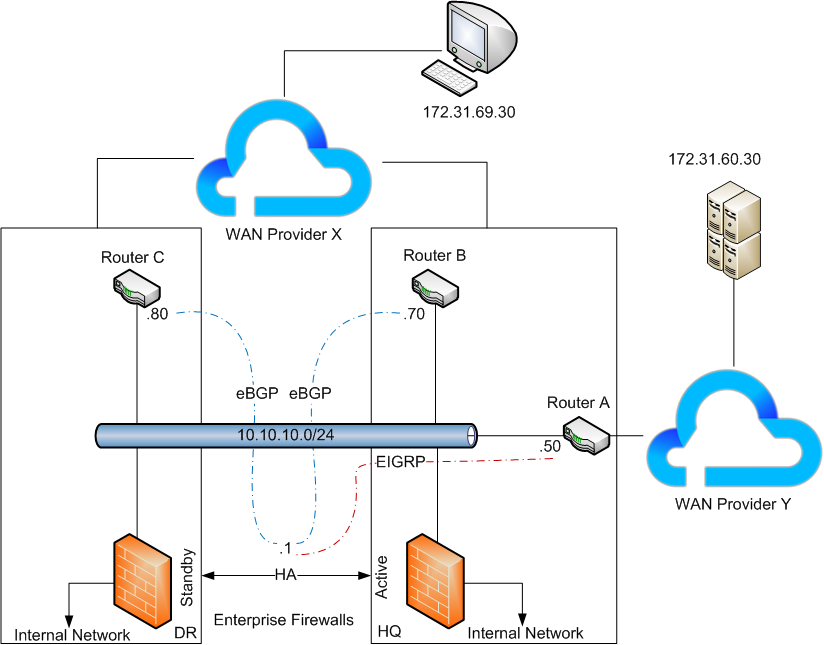 In the above example we have an active/standby firewalls who are responsible for redistributing EIGRP routes from WAN provider Y to BGP route to WAN provider X and vice versa.

This is effect leads to be asymmetric routing where the routing traffic from WAN provider X will bypass the firewalls and route directly to the WAN provider Y.

In a VPLS solutions where all sites communicate over a single LAN segment, you’d probably want the next hop address to the remain unchanged to avoid sub optimal routing and potential bottlenecks but at the same time, where you have statefull firewalls in the path or participating in routing, you must ensure traffic is symmetric in most cases. an Active-Active setup with session sync would work but s.

In our example, users couldn’t access the server, although ICMP appeared to work so I had to troubleshoot.

We all know ICMP doesn’t really prove connectivity so we performed a number of TCP test replicating the failure scenario.  Then we began running packet capture to determine what why TCP was failing whilst ICMP was working.

Note the sequence of events.

The solution is to modify the the next hop advertised by applying the next-hop-self command which will ensure returned advertising router is always used in the return path. This is a default behaviour in eBGP but if peering is configured between multiple peers across the same layer2 segment then originating nodes are imported as the next hop for each prefix.

Digitalsom is committed to supporting our customers to rise up to the exceptional challenge we all face in COVID-19. At this time, we want to ensure that we are sharing as many examples, insights and opportunities with you all as possible. Whether it’s examples of how similar organisations are confronting this challenge or opportunities for collaboration. As such, we would be very grateful if you could share anything – no matter how big or small with us, via info@digitalsom.net Together, let’s support one another and help businesses survive and thrive. Dismiss